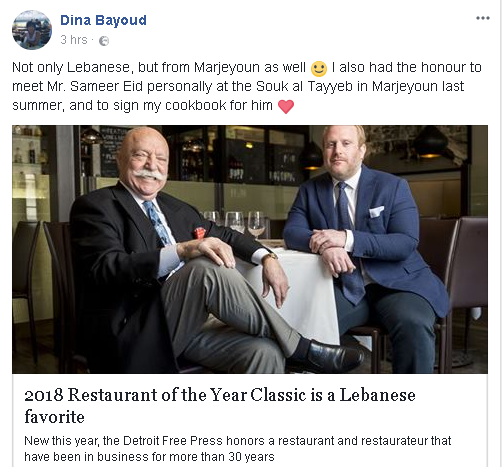 On 11 February 2018, I read an article by “The Detroit Free Press” recognizing Sameer Eid the owner of a Lebanese Restaurant called Phoenicia as one of the best restaurateurs in Michigan. He’s been in the business since 1971 four years before the start of the war in his country of origin Lebanon. When I woke this morning one of the first things that popped up while checking my Facebook page was the status of one of my hometown relatives. A very talented cook Dina Bayoud Kohl writer of “The Taste of Marjeyoun.” Talked about her pride & honor for meeting Mr. Eid.

It’s always a pleasure & moment of pride when a Lebanese shines outside and we have many. With Sameer, it’s extra special for me because he’s from my hometown and because the food business is a passion of mine. Being a restaurateur has been one of my dreams for the last ten years. What makes Mr. Eid an interesting personality in the food & hospitality business is that after 47 years he’s still hands-on when managing his restaurant. As per the short video filmed by Detroit Free Press, it’s all about having the perfect products for his place and it can only happen if he personally attends to it. As per his statement to have a successful business, especially in the hospitality sector you need to be yourself attending to the details. As quoted by Mr. Sameer Eid “I’ve been married for 41 years I have a mistress at home and a wife called Phoenicia.” The latter statement might seem extreme and unfair to his wife but to succeed in a business and become synonymous with a city of the stature of Detroit it’s not easy. One of the market owners where Sameer Eid picks his goods stated that Eid is a special treasure to Detroit.

It’s been really amazing to know and write about the certain personality of the stature of Sameer Eid. He’s not only a treasure to Detroit and Michigan, but to Lebanon and my hometown Marjeyoun. I hope the next time I visit the United States I could be able to go to Detroit and try Phoenicia myself as it seems like an amazing restaurant.